Use giant balloons to make the most out of your advertising budget.

They say the bigger the better and this is definitely true in the case of giant helium balloons. 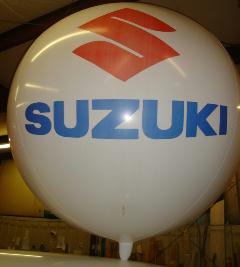 When you read the newspapers or some magazines, surely you would have the tendency to look at the ads that are bigger. The smaller ones are rarely noticed by most people. This is just the reason why companies tend to have as big ads as their budgets can afford, because “BIG” means attention getting.
Unfortunately, “BIG” also means a bigger budget and not all companies have big advertising budgets. After all, advertising is an expensive affair.

These balloons are not only very big – that means they are guaranteed to get the attention of people, but compared to other advertising media, these are comparatively cheaper. Today, getting across a message to consumers by using expensive advertising media like TV, radio, magazines, newspapers, just makes no sense at all. It is just good money being wasted. 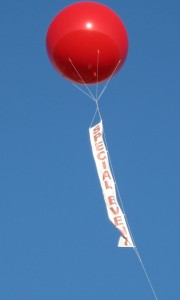 This is because consumers no longer pay attention to ads, in fact, they get irritated when ads are shown during their favorite TV show as this disrupts the flow of the program that they were watching. As such, advertising in such media is definitely a waste of money.
But you can get attention without it costing you a fortune
Now, whether you have a big advertising budget or a small one, it really does not matter because you can get the attention of people without you having to waste a fortune on advertising. Also, you can use your advertising budget to create a cost effective advertising campaign.
The best part about this form of advertising by making use of huge advertising balloons is that as a result of the advances being made in technology, there are so many kinds of these big ad balloons that are now available.

Not just the normal balloons of hot air

You can still order the good old hot air balloons that have been available for years and they definitely still do create a lot of impact, but now there is much more to these big balloons than just the hot air balloons of the old.
Today, it is possible for you to get balloons in all kinds of colors and almost any shape – in fact, you can even order the balloons so as to make them tailor made to suit whatever advertising or promotional needs you have. Truly, you can now make the most out of your advertising budget by using giant helium balloons.